Hot water extraction and steam carpet & rug cleaning in Wicklow and surrounding areas! With our advanced equipment, the rugs are completely dry in just a few hours. Leave the dirt, dust and stains behind - call us for a free consultation to get your rugs cleaned today! Fresh and clean rugs in 1-3 hours.

Click or tap here to request a quote for your rug cleaning in Wicklow. Alternatively, call or start a chat with one of our experts. We're confident that you'll find our prices to be very reasonable.

2. We do the cleaning

At the agreed-upon date and time, our professional rug cleaners will visit your house to deep clean your carpets and rugs. They will make sure you receive high-quality cleaning services. Every member has been fully trained to make your carpets looking sparkling clean.

Bask in the relief of a shiny, radiant, and deep cleaned rugs & carpets. Now, we’d love to know how we did! We want to make sure your rugs are properly cleaned. 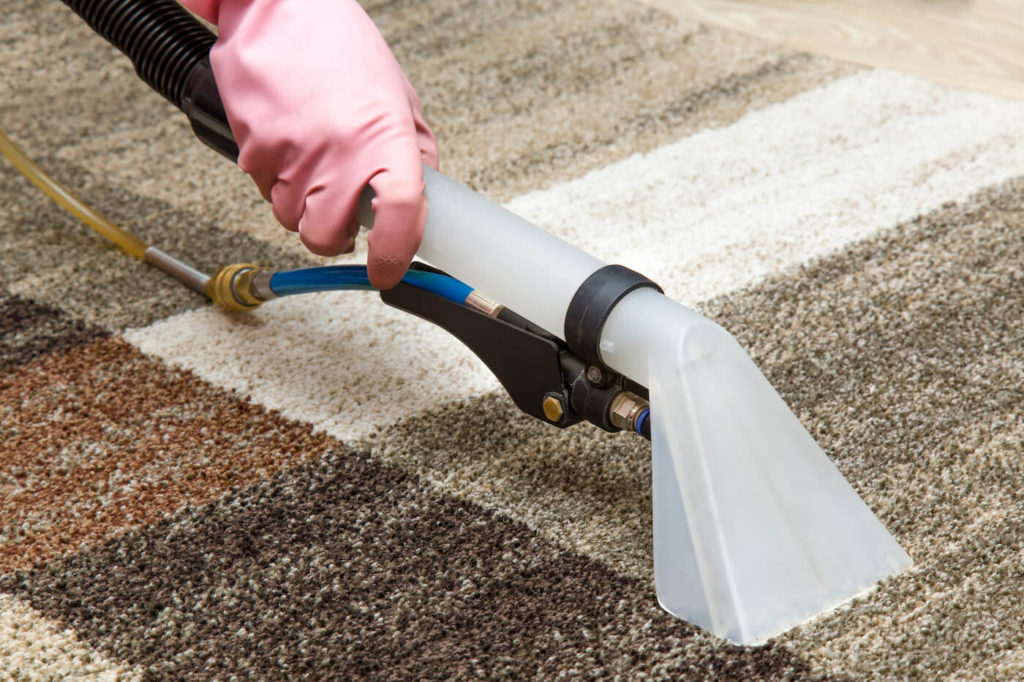 If stains on your carpets are keeping you awake at night, our Wicklow carpet cleaning service can help! You don’t have to be concerned about people walking on it or dirt accumulating every month. We will eliminate years of dirt and improve air quality with our new cleaning approach.

Call Everclean at 01 503 7011 or use our online form to book your rug & carpet cleaning. We are delighted to meet your requirements!

What carpet cleaning method do we use?

We use hot water extraction or steam carpet cleaning depending on the fabric that your carpet are made from. These cleaning techniques are appropriate for the following: 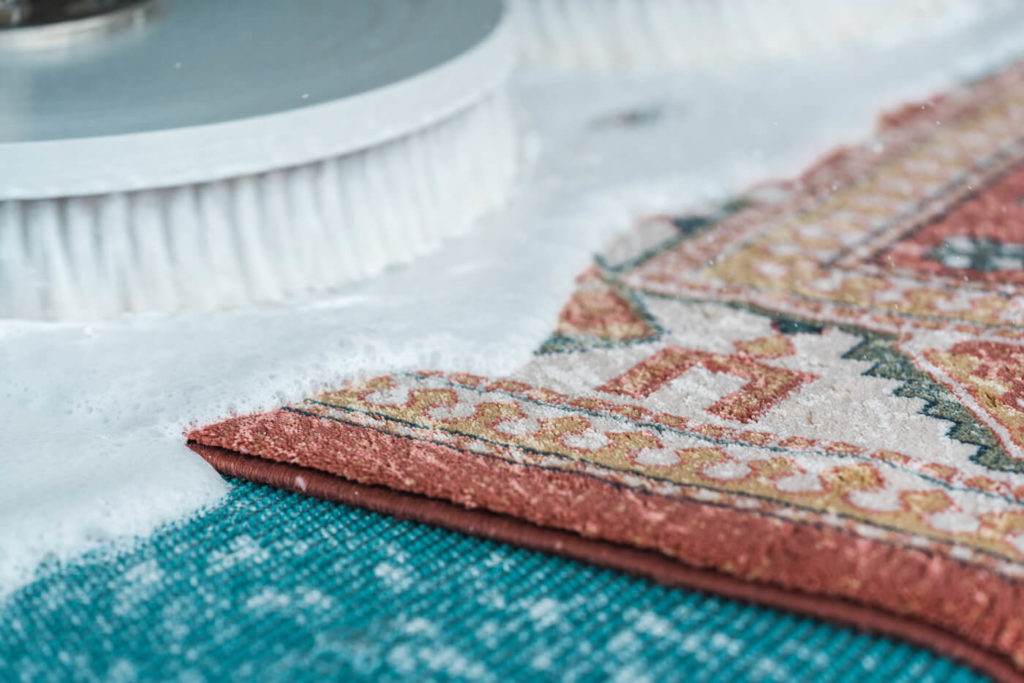 Why is our rug cleaning service the best?

Don't mind the supplies and equipment

There’s nothing you need to do, bring or buy! We’ll bring our first-rate supplies and equipment for your carpet to clean, and you just sit back and relax.

Our team has the proper equipment and training to keep you safe from COVID-19, our staff undergo being tested frequently in order to ensure that our customers stay healthy!

We provide accessible, convenient and high-quality carpet cleaning Wicklow service. We truly believe that every resident of Wicklow should have the opportunity to get excellent cleaning services at a fair price.

We work to your schedule

Schedule your domestic carpet cleaning services with total flexibility. Just let us know a convenient time and day for you!

Our carpet cleaning products are safe for children and animals. You can rest easy knowing there’s no chance of irritation after cleaning.

We respect our clients’ time and schedule

Our cleaners arrive promptly, work efficiently, and deliver quality. So you never have to wait long or put your life on hold.

We handpick the best carpet cleaners to ensure you receive nothing but the best. Our cleaners are veterans at what they do, and each has been in the industry for at least 3 years.

At Everclean, trust is baked into our ethos. All of our cleaners go through a background check, so you can have full confidence in the people you’re paying.

Everclean is one of the most reputable carpet cleaning company in Wicklow. Our Google Reviews show that we want to keep the same reputation, offering the best possible services to our customers.

The same people every time

If you're more comfortable getting the same cleaners every time, that's great. Simply let us know if this is the case.

We demand perfection, nothing less. At the end of every cleaning session, we send in our quality control inspectors to make sure we’re delivering the sparkling results we promise.

We actively gather your feedback after each visit. If you’re not 100% satisfied with our carpet cleaning service, please let us know, and we will make it right at no additional cost!

How much does carpet cleaning cost in Wicklow?

The cost of professional carpet cleaning in Wicklow is somewhere between €60 to €300, and most homeowners pay an average price of €150. Get a free estimate to learn the exact cost for your needs.

Is it worth getting carpets professionally cleaned?

Hiring a carpet cleaning company definitely is worth it. We will clean your carpets and rugs more deeply and carefully than you, removing any dirt and allergens.

How often should carpets be cleaned?

Deep cleaning your carpets every 6 months will keep them clean and safe for your healthy. Pet owners should clean all carpets every 3 months, especially if you have a child.

How soon can you walk on the carpet after cleaning?

Once you’ve had your carpet professionally cleaned, wait at least 4 hours before walking on it. This will ensure that they dry properly and are safe to walk on.

How do professionals clean carpets?

What types of stains can be effectively cleaned?

We can clean most stains from your carpets and rugs, like coffee, wine, urine and others. We will also remove dirt, dust mites, bacteria, allergens and other contaminants. We use eco-friendly equipment and non-toxic cleaning products to thoroughly clean your carpets.

What locations do you cover?

Our cleaning services are available throughout Dublin (including North Dublin and South Dublin), Kildare, Meath and Wicklow. We also work with local carpet cleaners in other cities. Check if we cover your area by live chat, phone, or sending a message through our contact form.

Yes, we offer carpet cleaning services for both residential and commercial customers.

Do you offer upholstery cleaning services?

You can have both, upholstery cleaning and carpet cleaning service done at the same time. Just let us know either in the booking form or by contacting us.

What clients are saying

For the past two years, Everclean has been cleaning my rugs with excellent results. I am very happy with your cleaning services and would never want to use any other carpet company in Wicklow. Thank you.

I hired Everclean to perform a professional carpet cleaning service, and everything went perfectly. Thank you for your assistance, you are the best Wicklow carpet cleaners.

The team was highly efficient, professional, and quick. On the rugs, they performed a fantastic job. Through the entire process of cleaning, they were willing to adjust to my requests and preferences. I am very pleased with the results and will certainly use their services again in the future.

I was really pleased with cleaning service that I received. I recommend Everclean to anyone searching for a competent carpet cleaning team in Wicklow.

The Everclean team arrived to my property and thoroughly cleaned my upholstery and rugs. This is why I'd like to express my gratitude to them.

County Wicklow is a county in Ireland. The last of the traditional 32 counties, having been formed as late as 1606, it is part of the Eastern and Midland Region and the province of Leinster. It is bordered by the Irish Sea to the east and the counties of Wexford to the south, Carlow to the southwest, Kildare to the west, and Dublin to the north.Wicklow County Council is the local authority for the county, which had a population of 142,425 at the 2016 census. Colloquially known as the “Garden of Ireland” for its scenery—which includes extensive woodlands, nature trails, beaches, and ancient ruins while allowing for a multitude of walking, hiking, and climbing options—it is the 17th largest of Ireland’s 32 counties by area and the 16th largest by population. It is also the fourth largest of Leinster’s 12 counties by size and the fifth largest in terms of population.
Source
In order to provide you a personalised experience, our site uses cookies. By continuing to use this site, you are agreeing to our cookie policy.